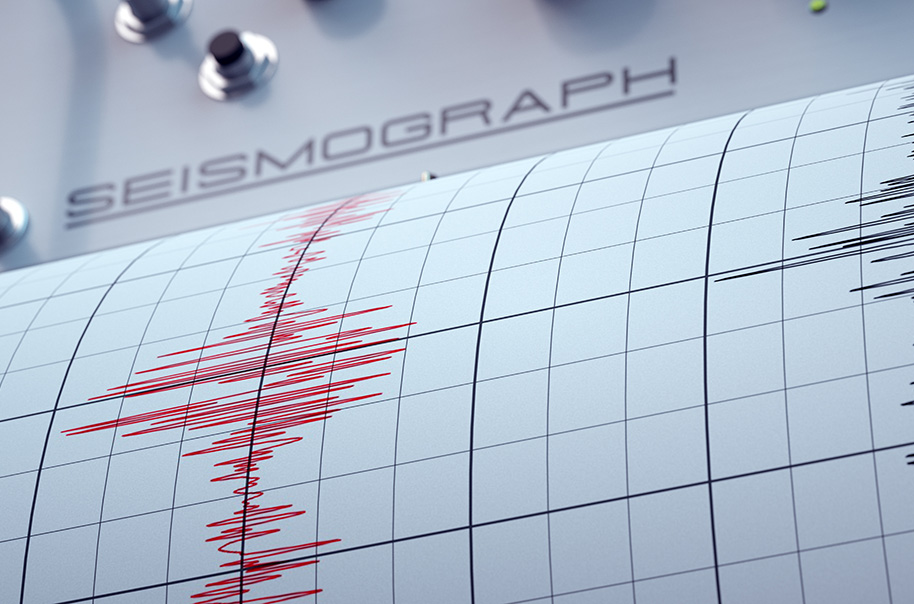 Earthquakes are among the most deadly natural disasters and are known for causing significant damage not only to populations but also devastating economic impact. For years many have debated whether earthquakes and weather could be related and as earthquakes increase in frequency, particularly in areas that are not historically prone to earthquakes, there is growing interest and accompanying research on the subject.

The largest earthquake on record happened in Bio-Bio, Chile on May 22, 1960 around 3:11 pm local time and the ground shook for around 10 minutes. The earthquake is estimated to have been between magnitude 9.4 and 9.6. In many places, it is recorded as having a magnitude of 9.5. It is the highest magnitude earthquake ever recorded. It is also estimated that between 1,000 – 6,000 people died from the earthquake itself and the other natural disasters that followed.

The Economic Impact of Earthquakes

Not only is the loss of life devastating from major earthquakes but they can have a huge economic impact as well. Statistia recently ranked the ten biggest natural disasters worldwide by economic damage from 1980 to July 2022 and many of these events are earthquakes.

They note that “from 1980 to July 2022, the earthquake and subsequent tsunami in Japan in 2011 caused the highest economic damage, with losses reaching 210 billion U.S. dollars. The tsunami hit the nuclear plant at Fukushima, causing a nuclear disaster in the area. Second was Hurricane Katrina that hit the Gulf Coast of the United States in 2005, where the state of Louisiana and the city of New Orleans were especially affected. In terms of fatalities, the earthquake and the resulting tsunami in the Indian ocean in 2004 caused the highest death toll.” 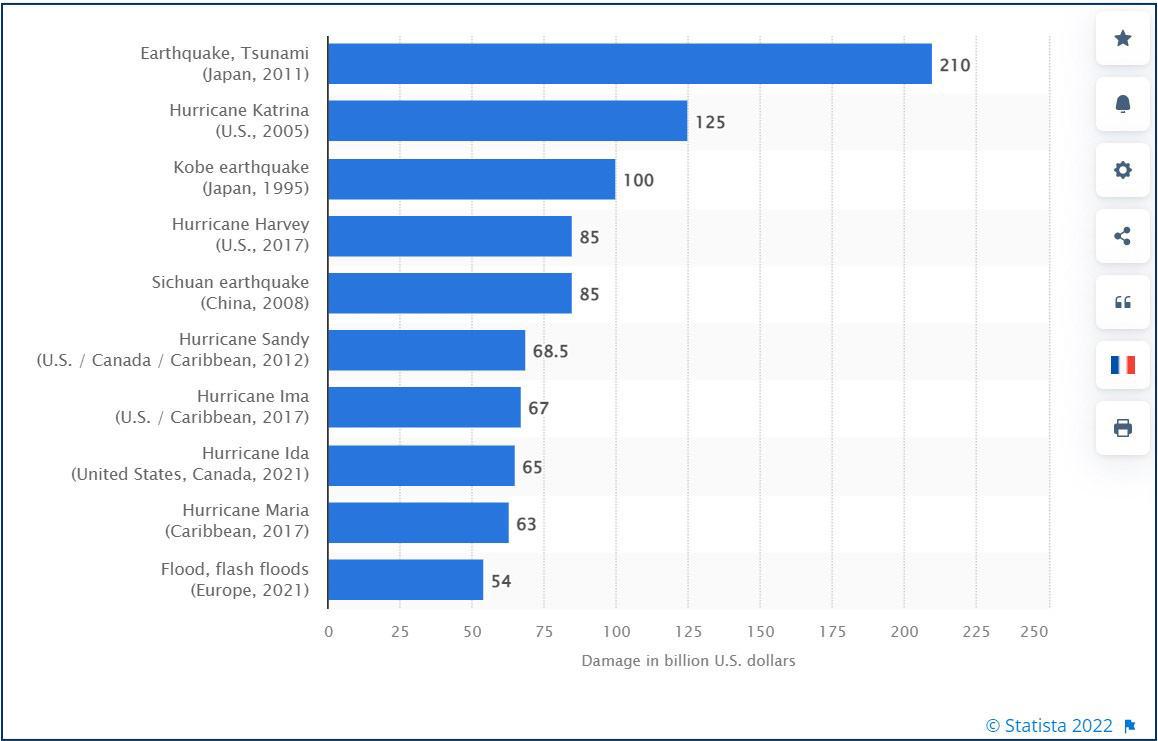 Looking back at the 1960 Chilean earthquake, its government estimated that nearly two million people became homeless and over 58,000 houses were completely destroyed. The damage from the earthquake and tsunami totalled more than $550 million U.S. dollars. In Hawaii, the tsunami created over $23.5 million dollars in damage and the U.S. West Coast suffered an additional $1 million in damages.

In the U.S. the most economically devastating earthquake in recent history was in Northridge, California (1994) where a magnitude 6.7 earthquake hit the area, a neighborhood of north Los Angeles. An estimated 60 people died, more than 9,000 were injured and 125,000 were temporarily left homeless. Business Insider estimated the quake cost the city approximately $35 billion in damage. Further, the U.S. Geological Survey (USGS) has warned that there is a 70% probability of at least one magnitude 6.7 or greater earthquake striking the Bay Area before 2030.

What Could be the Cause of Earthquakes?

For years scientists have been looking for a connection between weather and earthquakes. Recent findings seem to reveal that there may be truth to the theory. One recent study shows a strong correlation between solar activity and large earthquakes worldwide.

Researchers Vito Marchitelli, Paolo Harabaglia, Claudia Troise and Giuseppe De Natale looked at data on earthquakes and solar activity to ascertain if there was a correlation. Their paper theorizes that clusters of protons from the sun may correlate to large earthquakes on Earth. The sun, like all active stars, constantly vents matter in the form of solar wind, which includes particles like electrons, protons, and ionized helium atoms. The distribution and density of these particles vary, as the sun has variable “weather” just as the Earth does. Their data consisted of worldwide earthquake data as well as measurements of solar protons from the Solar and Heliospheric Observatory, a joint satellite of NASA and the European Space Agency that was launched in 1995 and is still active.

Their study has been a subject of great debate from many scholars. However they note that until now, no statistically significant correlation of the global seismicity with one of the possible mechanisms has been demonstrated. In this paper, they analyze 20 years of proton density and velocity data, as recorded by the SOHO satellite, and the worldwide seismicity in the corresponding period, as reported by the ISC-GEM catalogue. They found a clear correlation between proton density and the occurrence of large earthquakes (of magnitude greater than 5.6), with a time shift of one day. In statistical terms, that would imply a very confident correlation between the two events, meaning proton density and the occurrence of large earthquakes, they say.

In another study by Stanford researchers (2016) monitored the strength of solar magnetic fields leaving the north and south poles of the sun. After observing a correlation between significant magnetic events on the sun and earthquakes, the apparent correlation was modeled by The Ohio State University Statistical Consulting Service, and published by New Concepts in Global Tectonics in September 2015. Since the end of the study, the model appears to be working even better than before the publication. There are several videos that can be viewed that visualize their work.

Additionally, David Novosardian of the University of California, Santa Cruz recently examined the correlation between magnitude and temperature in his July 2022 research. He studied statistics from the hottest and coldest weeks of 2021 in Northern California. He saw a difference in that the quantity of earthquakes increased in colder climates while the magnitude tends to gradually increase in the warmer climate. When retrieving quantitative magnitude data for the specific weeks, he chose to collect 50 cases from each respective week. His research continues and he plans to look at data from several months worth of temperatures and magnitudes, instead of the small sample that he started with, although from his initial research he found a positive exponential trendline showing that when the temperature increases so does the magnitude.

Other theories that have been discussed over the years vary from drought, glaciation, water use and induced seismicity and even atmospheric storm anomalies. The science is still out but it will be interesting to see what further research unveils in the future.

Weather Source’s OnPoint Analytics is a service that provides climate & peril risk scores and probability of return by dynamically calculating the peril frequency rate and probability of each risk on a global scale based on naturally occurring risk (i.e. baseline risk) and longer-range and seasonal forecasts. While it may seem intuitive to understand that certain locations will be more (or less) prone to certain hazards, the process of objectively and accurately quantifying these risks for worldwide locations is a complex task that requires efforts from a team of skilled scientists across many disciplines. The OnPoint Risk Analytics platform allows users the ability to not only understand Baseline Risk (i.e., the risk of natural hazards with respect to the earth’s “normal” climate, weather patterns, and current geological conditions) but also to understand when a weather event is expected to depart from the Baseline Risk.